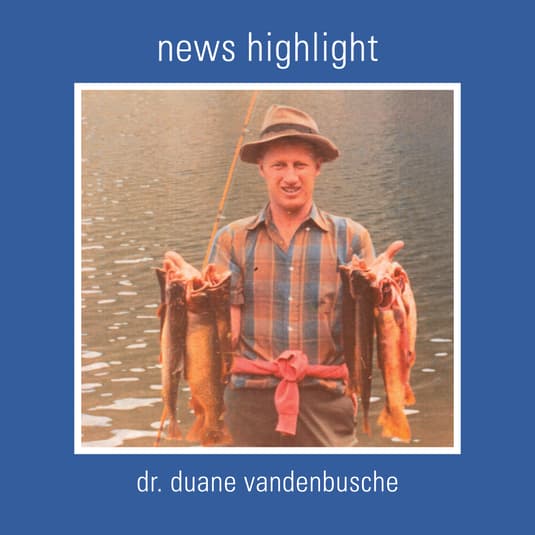 An Interview with Duane Vandenbusche

This winter, Bud Bush interviewed one of our local legends, Duane Vandenbusche. Duane has a wealth of knowledge of the Gunnison valley and other areas of Colorado. Normally the storyteller, this story is about Duane himself. From growing up on a dairy farm to coaching Olympic athletes to being named Colorado State Historian, Duane walks us through his rich 83 years of life and the ups and downs along the way.

Truths of the Heart

There are lots of stories, but what about the storyteller? These stories have to come from somewhere, and how do they subsist through the ages? Well, this is a story about the best storyteller in our region, Dr. Duane Vandenbusche.

Many of us have been fortunate enough to hear fascinating historical recaps from Dr. Vandenbusche about heroic expeditions from mineral extractors to mail carriers or the inventions of extreme snow skiing jumps and descents that originated in the Gunnison Valley. Duane Vandenbusche is an accomplished historian, professor, author, lecturer and track coach, but he is also a genuine and charming man who pervades love and a kindly willingness to share his knowledge and experiences.

Duane was born to Belgian immigrants and raised in St. Nicholas on the Upper Peninsula of Michigan on a dairy farm, a locale he refers to as the second most beautiful area in the United States. Can you guess his number one destination? Here’s a hint: he arrived in the Gunnison Valley in 1962 to work at Western Colorado University and never left.

He was the second person from his community to attend college, and he credits his parents for his determination and work ethic. Following his undergraduate work at Northern Michigan University and graduate degrees from Oklahoma State University, Dr Vandenbusche recollects, “I arrived in Gunnison around Labor Day in 1962. The first night I happened in to the Coach Light for a glass of beer and noticed a picture of a ski jumper over the bar. I said to the bartender, that looks like the Upper Peninsula of Michigan or even Escanaba.” It turns out both Duane and John Grodesky were from the same town, so it was a sign that this was the place to be.

Starting as a history professor, Vandenbusche’s role evolved to include coaching track, earning twelve national titles in cross country and producing four Olympic runners. Early on, Dr. Vandenbusche helped the track team on the sidelines by clocking the runners. His continued hard work and dedication was noticed and he was quickly assigned to head coach.

Dr. Vandenbusche brought women’s track, cross country and skiing to the Gunnison Valley at Western in 1982. He grew up with five sisters who were all good athletes, but they could only be involved with cheerleading. Duane always thought this was unfair. Once given the green light at the university, he recruited female athletes from all over the country. He treated the women just like the guys. It was a level playing field where everyone received the same stipend, the same room allotments and the same workouts. Duane reflects, “Women are tougher than men. Try giving birth. I had a female athlete return to me after twenty years, and she said, ‘Coach, you kept us safe.’” She was grateful for an equal opportunity and for being made to feel comfortable and confident in her athletic endeavors.

Coach Vandenbusche was steady and consistent with his students and athletes. There were three rules to follow in this order: 1. Be a good person, 2. Be a good student and 3. Be a good athlete.

He emphasized a quote from Great Expectations by Landon Jones, “The greater the expectations, the greater the disillusionment when the expectations are not met.” He emphasizes that hope and heart are the true sources of encouragement, where expectations are stifling. One of his favorite quotes is from Immanuel Kant, “There are truths of the heart that are greater than truths of the mind.” Vandenbusche told his athletes to follow their heart, follow their conscience and do what is right. “Two thirds through a race, your body may tell you that you need to slow down. Your heart will tell you there is more where that came from and you need to keep going.” He taught with praise, encouragement and reward, which was instilled with a sound work ethic by his hard-working farming parents. He recognized progress and achievement in anyone, not just the winners. “I was never a yeller or a screamer. The loudest sound coming from me was [clapping sound] the sound of applause.”

Dr. Vandenbusche is 83 years old, but he could probably take down someone half his age. He is in excellent physical shape with short cropped hair, military posture and a steady twinkle in his eye. He listens intently and speaks with confidence and authority. His work out with weights takes place three times a week and he enjoys mountain biking and powder skiing for outdoor exercise. “On the farm, we didn’t have to work out. We were always bailing hay, moving grain or shoveling something.” He chose the Gunnison Valley and stayed here for those reasons, and because it wasn’t as cold and wet or as windy as Upper Michigan – and the sun shines a lot.

All the good practices don’t provide any guarantees in life – remember expectations? How to handle cancer and divorce. In 2015, Dr. Vandenbusche was diagnosed with Non Hodgkin’s B Cell Lymphoma. He was given 65 percent odds by his doctor. Following six chemotherapy sessions and a couple of positive PET scans, he was gaining strength and skiing within a couple of months. “No one actually beats it. At the time I had 78 good years and a great life. My mental attitude was very important. If I stayed upbeat, I might be able to come out of it ok,” he remembers.

At 29, Duane was briefly married for about a year. “Some people should not be married. I’m too independent. I like to come and go, and do the things I need to do.” Smiling he adds, “I’ve had many magnificent girlfriends, and I have remained friends with all of them.”

Those episodes are history, and speaking of history, Dr. Vandenbusche loves to talk about history, especially history repeating itself. He says that the coronavirus will later be seen as a “blip in the radar.” Comparing recent misfortunes to the great depression and World War II, he concludes, “All we have to do is stay home, wear a mask and social distance. Those people didn’t eat. They starved. They went off to Europe or the Pacific for years and some never came back. No BMW’s (bitching, moaning and whining).”

Also, regarding repetitions in history, he suggests that the US should stay out of the Middle East. “We can’t impose our way or change their way.” He states the importance of science in advancing society, “Following the Renaissance and the acceptance of science and Greek and Roman learning, Western civilization took off.”

Closer to home, Dr. Vandenbusche reflects on the most significant historical references from the Gunnison Valley, “It was probably the coming of the railroad— bringing goods to market from the farmers, ranchers and miners and the delivery of inbound supplies. The mining of coal was significant. And, the marble from nearby Marble was mined for the Tomb of the Unknown Soldier, the Lincoln Memorial and the Washington Monument.”

From heart to history to home, Duane also acknowledges his spiritual foundation. “I guess I am a Pantheist [the universe and God are one in the same]. I am religious; I say my prayers every night. I was raised Catholic. A lot of things we don’t know we will never know. The French philosopher Rene Decartes says, ‘The universe can be explained by mathematics. All we have to do is find the numbers.’”

Looking forward, Dr. Vandenbusche reviews the big picture regarding societal progression. With 7.5 billion people in the world, we have to be concerned with running out of water, land and food. And with climate change, some areas of the world are becoming uninhabitable. Populations are relocating. “We need right now a war on behalf of science, like the New Deal. We need to implement alternative energy sources and focus on food, water and population control and to address climate change. It’s the Malthusian Theory: food production goes up arithmetically, population goes up geometrically. In other words, food supply can’t keep up with the population, and the four horsemen of the apocalypse ride.”

It might be a little mind boggling, but at the other end of the scale, in contemplating his place in the world, Dr. Vandenbusche quotes Isaac Newton, “I see myself as a little boy walking along a beach now and then picking up a pretty stone while the vast ocean of unexplored knowledge lies in front of me.” He continues, “The pretty stones were calculus, the reflecting telescope and gravity in that quote. We don’t know anything.”

Dr. Duane Vandenbusche has recently been named the Colorado State Historian, the first time the designation has been awarded to a resident of the Western Slope in its 95-year history. The post will blend well for Dr. Vandenbusche and his continued lectures, webinars and podcasts. He often speaks without notes, reciting names, dates and events in a remarkable way as if he was reading from an encyclopedia.

“I’m just a poor old simple country boy who grew up in modest circumstances in the second most beautiful area of the United States in a Belgian farming community. Everyone’s last name started with a ‘V’. Everyone was off the boat. We grew up with no expectations but a lot of hope.” Quoting an adversary, Maurice Richard from the Montreal Canadians hockey team, he concurs, “Some days were good days and some days were bad days but there was never any day that I didn’t try my best. And that is the creed that I live by.”

This week Dr. Vandenbusche is beginning a series on the exciting history of Crested Butte and the Elk Mountains beginning on January 28 and ending on April 15. This series will be held via Zoom every Thursday evening from 7-8 pm. This program is free. To register, go to crestedbuttemuseum.com.