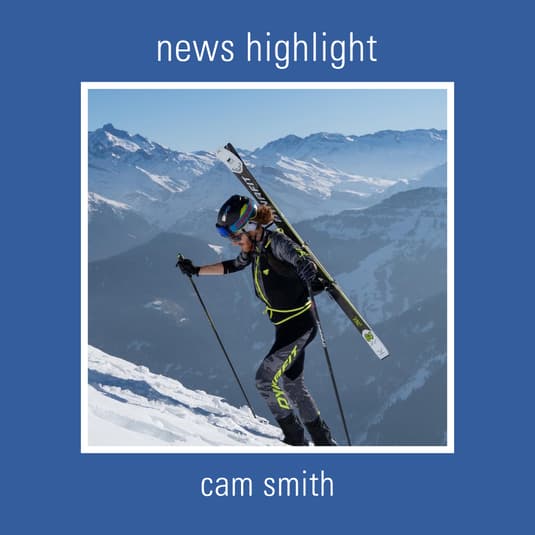 An Interview with Cam Smith

This summer, we had the pleasure of interviewing local elite endurance athlete Cam Smith, who is training for the 2026 Winter Olympics in ski mountaineering. Bluebird is passionate about our community, so this story has a deeper meaning for us. Cam gives back to his community through his work with the Adaptive Sports Program, fundraising for Living Journeys, coaching for CB Nordic and the Western Mountain Sports Team, and volunteering his time with USA Skimo to help build up the National Ski Mountaineering team. Cam's unassuming and humble presence, coupled with his desire to do his best and make the community proud, set him apart from the competition. Take a moment to learn more about our respected friend and neighbor as he takes on the world stage. It's a story you won't want to miss.

By Patti Miller and Bud Bush

Dynafit athlete and Crested Butte resident Cam Smith is no stranger to ski mountaineering, whether at home in the West Elks or abroad in the European Alps and Pyrenees mountains. His recent third place finish at the International Ski Mountaineering Federation (ISMF) World Cup vertical race in Andorra marks the first time a North American has made the men’s podium at an ISMF World Cup event. Cam’s drive to win has always been there, but now at a new level with his sights set towards the 2026 Winter Olympics in Milano Cortina, Italy, which will include Ski Mountaineering for the first time.

Upon first glance, your eyes might pass right by Cam. His unassuming and humble presence coupled with his modest frame don’t immediately ring “superman”. Cam blends in with the Crested Butte local color with his handsome smile, scruffy beard and puffy red pony tail.

Lean agility is what it takes for this kind of endurance sport. So, what is ski mountaineering or “skimo” racing for short? It is not as widely recognized in the US as it is in Europe. It’s basically performance-oriented ski touring (where you stick adhesive backed “skins” that have crosshairs on the bottoms of skis to help you go uphill with hinged toe pieces and free heels), with the objective of using the sport as a form of exercise while combining different elements of mountaineering on skis. Once at the top of the mountain, the skins can be ripped off and tucked in a pack. The heel of the boot is then locked into the heel piece of the binding and alpine style downhill skiing commences.

Although the competition was daunting when he first started racing internationally, Cam recalls how exciting it was to skin through a tunnel of over 3,000 spectators at one of the transition zones at the top of a pass during a European race. He believes US races are also fun because they are grassroots events with great terrain and a variety of courses. The sport of ski mountaineering is deeply infused in European culture, with kids and families going on ski tours, getting crepes and cappuccinos at the top of the mountain, and then skiing down as a family. This helps feed the sport with plentiful races and athletes to draw from for world class competitions.

More than a race

Cam’s parents met at Western Colorado University, and both he and his sister, Zoe, graduated from the University as well. Cam knew the Gunnison Valley was where he wanted to live, work, play and train, so he decided to pursue homeownership a couple years after graduating. In conjunction with Gunnison Valley Regional Housing Authority’s affordable housing program, he asked a Bluebird agent and family member of a friend to help represent him in the purchase of his new home.

The summers are wild and busy for Cam working full time at the Adaptive Sports Center and teaching classes at CORE in Crested Butte, along with training full time. “I really wanted to work outside, ideally with a nonprofit, and Adaptive was the best outfitting business that fit that mold. Once I started working with them, I got really passionate about their mission and cause. It’s a huge part of my life now. Adaptive sets a true global industry standard.”

In the winters, Cam coaches at the Crested Butte Nordic Center along with Western Mountain Sports Team’s uphill program. He is also passionate about Living Journeys and has raised funds for the nonprofit cancer support group using racing as a fundraising platform in the past. “I’ve found that when I have these long periods of just training and racing, then I kind of feel empty if I’m not doing anything outside of myself… so I need to stay involved and be in the community.”

Cam credits his sister, Zoe, for getting him into the Elk Mountains Grand Traverse backcountry ski races between Crested Butte and Aspen, as well as teaching him how to mountain bike. Though not super competitive, Zoe also enjoys experiencing all the recreational opportunities this valley has to offer. Cam reflects on the recent race challenges, “The Grand Traverse is a wild backcountry event, and you never know what you are going to run into out there. It was such a dark night with the clouds and the new moon and I was trying to ski hard on the downhills because you are looking to make up time wherever you can, and essentially I got clothes-lined at shin level by barbed wire.”

From there, Cam went on to win his fourth Grand Traverse (GT) ski race this past winter, and to date has won three other GT summer running races and two Triple Crown GT titles from cumulative points earned by skiing, running and biking the GT in one year. Cam spends just as much time out of bounds as in bounds resort terrain, and when asked what discipline he likes best, he emphasizes, “A good day on my skis is impossible to beat. An awesome powder descent on a local peak or touring around in the spring in great corn conditions are definitely the days that I live for the most… It’s my favorite thing to do and that probably makes me compete the best at it.”

Learning new skills at a faster level and training with friends and community members has taught Cam the adaptability that is necessary for competing on a world class stage. “Fitness is built really slowly, but it’s also exponential - where the fitter you get, the more you’re able to push yourself - and the more you’re able to push yourself, the fitter you get, and that cycle sort of repeats itself. If there’s anything that makes my track record remarkable, then it’s just that ability to improve a little bit week in and week out, month in and month out, and suddenly doing well... I joke the faster you go the less endurance you need, but there’s some truth to it [because the faster you go, the less time it takes].”

“Training helps you enjoy backcountry skiing more, and then backcountry skiing gives you the skills to enjoy racing more.” Cam goes deeper into the introspection and determination involved in preparing mentally ahead of time for “make or break” situations that occur during a race. At critical junctures during races, the plan and acquired tools and experience become vital in persevering. “You really have to think about your “Why” in training beforehand, so that when the difficult moments come around in the race you are not searching for those motivations.” It is evident that serious mental and physical planning and a longer-term approach set the stage for competition days. World class athletes, even in emerging adventure sports, are way beyond “winging it” and natural talent only plays a partial role in success. Discipline, consistency and a tactile approach to planning and executing are crucial elements to success. When the going gets tough, they draw on their inspirations.

“If you back down or quit or drop out, then your role model is going to be so disappointed, so how could you ever even consider it? It’s the same thing with my family and community members here. I feel such an overwhelming amount of support from people that I don’t even know personally that I just see on the street that say ‘Congratulations!’ or ‘Good luck’ at the next event!”, to co-workers and friends that are always excited and asking about things, to family that’s closer. There’s just so many people that are genuinely excited and proud of me and want to support me that I just want to do my best competing. Of course, when things are difficult or painful it’s easy to back off a little bit, but I know I want to get everything I can out of myself so I can make the community proud.”

At 26 years old, Cam sees a big window of competitiveness ahead of him. “I have been obsessed with the Olympics since I was little and always watch as much of it as I can get. I’m so excited every time one comes around, so the prospect of being able to experience one myself is a life goal.” With a clear-headed approach, he says to get there he can’t just focus on a single point in the distant future, so he needs to break it down into short term goals. His robust winter training and competition schedule includes goals of repeating his World Cup results and maybe even winning one or two events. He also plans to add some hard running races to his summer calendar, because it’s the competition that excites him. Cam feels his dreams are attainable with inspiration from local Olympic athletes like Emma Coburn and Aaron Blunck taking that same jump and he says, “It’s great to see that path exists here locally.”

There are between zero and two national spots per gender for Olympic qualifications based on how many points each nation earns, so Cam’s focus will be on World Cup events for the next three years. First, Cam must qualify the United States as a nation by racing in the World Cups and earning points on behalf of the country between now and then. Qualifications for the US team will likely relate to World Cup results the prior year. Western is also the leading collegiate team in the country, so Cam’s work coaching younger athletes and volunteering his time with USA Skimo to help build the national team actually develops his own competition for future US Olympic team spots. “I wouldn’t want to go to the Olympics due to a lack of competition… I’d love to see the US be a world-beater down the road - we’ll see!”

Going forward, Cam says he is serious about spending Winters in Europe, particularly the French Alps for their great culture and central location. International athletes can also apply for a special talent visa making it easier to train and compete for extended periods of time. For now, he’s ready for another busy summer of training, working, participating in the community, and competing. “I’m in an extraordinary place, with extraordinary people around me, with an extraordinary opportunity. I think that’s the reason things have gone so well. People care for each other so much in a small town like this. It’s amazing the amount of love and support I feel from people in person and the messages I get when I’m away. We’re in some of the best mountains in the world. I’ve been able to ski and experience lots of different places and I still look forward to coming back to this exact corner of the Elks, because this is where I want to be.”