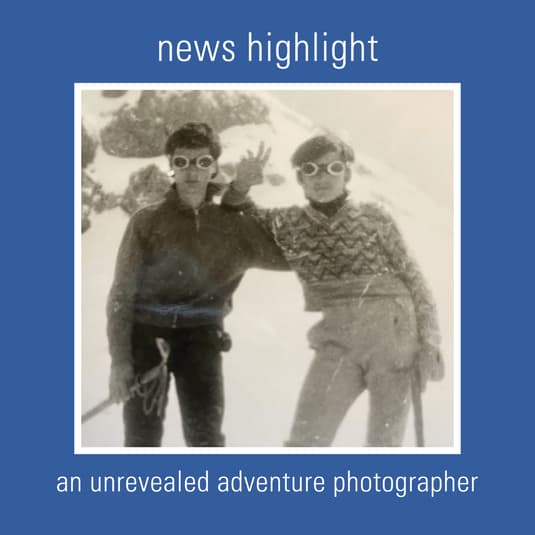 An Interview with an Unrevealed Adventure Photographer

This summer, we interviewed a local adventure photographer. As this individual travels the world through various wild landscapes, he thoughtfully contemplates the lessons these natural places have to give. In this article, we learn about some of the impactful experiences he has encountered and how that affects the way he portrays the landscape in photography.

Mystic in the Mountains

People find their connections in many different ways, and we never know if these pathways are of this world or from another time. This is the story of a solitary man who is deeply connected to the mountains, and he finds peace and balance when he is lost in them.

With the yin and yang of the universe, we observe contrasting forces that complement each other. They might not seem to work together, but we know that sometimes opposing elements attract. Our subject can be an invisible persona who routinely exists quietly among us. He has an “under-the-radar personality”, charming, thoughtful and engaging, yet unassuming and observant. His passion which accompanies his mountain expeditions is photography. So, the invisible becomes very visible through his visual art.

Other opposing balancing poles are daily life and escape. Introverts love to be by themselves, refueling in peaceful surrounds. This adventurer yearns for the next opportunity to leap into the back country, to explore a new cliff or drainage. He captures images that have never been seen before, making even the most experienced viewers wonder, “where in the world is he?”

“Exploring the mountains is a metaphor for exploring yourself, who you really are. I’m not a religious person, but when I go out there I feel something. I wrap myself around the mystery of the universe and the world spinning around. I accept that mystery and don’t try to give it a form or a shape, I like to keep it abstract. Photography is a reflection of what I see and feel.”

A mystery surrounds this human, because he is aware that all need not be revealed. Much can be left to the imagination, and self-discovery is art and life. He shares unidentified glimpses of his experience and holds only a handful of people very close to him. His wife is his partner and guide in his social world and he is the guide in the wild.

“As human beings, we are social animals. We herd with friends. I have a need for interaction, but a big part of me craves solitude and being out there. I do love coming back in town and having coffee with friends.”

Growing up in a more constrained European society, our immigrant reflects on a darker time where he wasn’t even permitted to speak his native tongue. He found freedom in mountaineering school as a youth. The woods and the mountains were a special place that he learned at a young age would bring him peace and joy. While sitting in the classroom, he mapped circuitous excursions, being careful to avoid roads and towns.

“I would go explore areas on the weekends when I was twelve or so, and I was passionate about it. There were no communications back then. I would just disappear. I took rock climbing as a sport at age fourteen. My parents worried, but it was all for the greater good.”

A life-changing opportunity arrived when he signed on to manage a local hut in his home country.

“In my formative years, I was the caretaker of a nearby hut. It was a beautiful spot above tree line and open during the summer. It was an important period in my life, with time to myself, just hanging out naked on a rock, thinking about life and the universe.”

He discovered photography at a young age when his father lent him his camera.

“My father had a little Voigtlander camera, a German maker – they still make cameras. He always had that camera with him. When I was a little older, he would lend it to me. We didn’t have the means to acquire a new camera - and he gave it to me when I turned eighteen.”

He met a young American woman in Switzerland who introduced him to a new adventure on the California coast. He eventually discovered Crested Butte in 1984 after seeing its name in a ski area guide. The Gunnison valley was an instant attraction, a place which embraced diversity and welcomed people from all backgrounds. In a place with a wagon wheel of drainages, exploration would be endless.

“Crested Butte was progressive for its time. It had a brightness and was accommodating to people from other walks of life. It was very cozy and it felt very right for my persona, an introspect. There are mountains with space to roam, and a community that supported me. I interviewed with the ski school director, Robel Straubhaar. Once he learned that I had worked at a ski area near his hometown in Switzerland, he said, ‘you’ve got a job here.’”

One summer, our guide was hired to help survey an area in southeast Alaska, a perfect match for his exploratory nature.

“They didn’t know what was there. We had a base camp and took notes of species and measurements of trees. I learned about being comfortable in the wilds. It was a dream job.”

As back country cycling was emerging, he co-founded a European mountain biking publication called Solo Bici. The magazine was well funded, which afforded him opportunities for writing and photography in places like Canada, Hawaii and Nepal.

The self-taught journalist and photographer refined his craft during these years and began to tune his aperture towards photography. Geography and nature with a human element reflected his sensibility. His images began to appear in local publications and media platforms, and this passion led to a profession.

With a desire to discover beyond the bounds of his locale, this outdoorsman has danced on trails around the world, from the Alps and Pyrenees to New Zealand, Alaska, the Himalayas, Corsica and Dominica.

A memorable encounter occurred on a solo trip in Alaska.

“I was around twenty-five, hiking by myself and came upon a shelf, a balcony in the forest. Looking over the cliff, I see four black bears below me munching around. I guess there was a favorable prevailing wind, and I was able to watch them graze without being noticed.”

He is not one to overanalyze his preparations, but he knows what is expected and he makes wise decisions. Someone so well-traveled in the back country around the globe might have advice on essential equipment and techniques for thriving and surviving.

“Before GPS, I was hiking in Alaska with a compass. There is a fear of being unsure or lost, but eventually you find your way. I prefer to have my sleeping bag for every trip. I feel naked without it. If I am lost or hurt and I need to stop, I have a place to be in and stay warm. I don’t use a water filter. I have been drinking out of streams for a long time. My doctor says that I’ve developed an immunity to giardia.”

He states that he is probably lucky to be alive and he has been in more dangerous situations than he cares to remember. But one episode stands out – a life defining moment in Nepal, which along with the location and culture changed his life.

“I was mountain biking on a narrow single track above the gorge at Kali Gandaki where it comes down to the Annapurna with a 2000-foot vertical drop to the river. When coming up the rise to the top, I face a train of yaks coming down the other way. I was taken by surprise on this ledge and suddenly I felt myself beginning to fall toward the drop. I made a final desperate move toward the hillside, shouted and made my bike go to the uphill side. I let the yaks go by with the shepherd in the back while feeling ecstatic to still be alive.”

He is contemplative about his Himalayan experience.

“Nepal changed me. I learned what is superfluous and what’s not. I try to maintain a peaceful state of mind and keep things simple.”

There are always new places to explore here in Crested Butte and all over the world.

“I like to see things with a wide-angle lens. But I also like to view the nooks and crannies of my backyard with a macro lens. There are worlds to explore here and everywhere. I would also love to visit Bhutan and Afghanistan. They are mountainous and wild. Also Siberia and Japan, not to ski but to get lost in the forest and the little villages, take pictures and see what people do there.”

How is this journey evolving? What have we learned and where are we going?

“My work is less of an ego trip now. I like to visit and display serenity and beauty of distant places that are hard to get to. Today’s rapid pace and our vision of nature as a playground trivializes the natural world. These days I’m slowing down with my camera and pack, crashing on a peak and strengthening my connection with nature. If you’re in the Picasso Museum, you don’t run through it. You stop to admire and appreciate the detail and depth of his work. We owe it to the mountains to be reflective and respectful.”